Dinah Pehrson, familiar to Hamner Theater audiences as an actress, is originally from New York. She has lived in the Charlottesville area since 1995 and sang regionally with the Dinah Pehrson Band from 2000-06. An alto, most of her repertoire is blues, but her musical tastes and interests are eclectic and far-ranging.

Multi-talented Doug Schneider has graced the Hamner stage as both actor & crooner on numerous occasions, (including with Dinah Pehrson in Love Letters), performing to sell-out crowds when headlining the Hamner Cabaret.

Noah Waggener has been a part of the Northern Virginia music scene since the 1980’s fronting groups such as Rude Rock Family, DCS and Stick m Up. He joins his Dad and long time friends to keep the feet moving at the Hamner!

Make sure to wear your dancing shoes and plan for a fun, shakin’ evening of blues and R&B with some Dylan, country, jazz, rock’n’roll, and who-knows-what-else mixed in.

A la carte bistro food will be available at the bar (Cheese and Fruit Plate, Hamner Sub, Boneless Chicken Dinner) 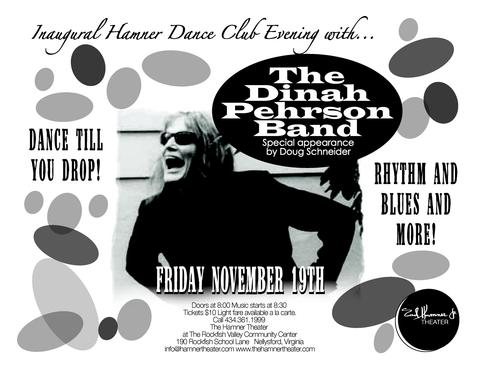