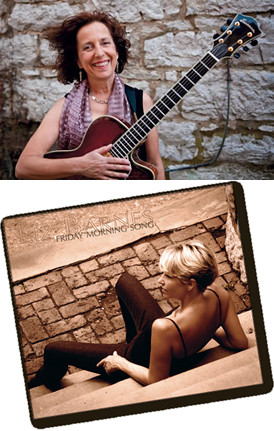 What happens when you put two spunky and accomplished female blues/jazz musicians together on the same stage? When it’s jazz pianist Liz Barnes and guitarist/vocalist Barbara Martin, you get an exciting musical synergy that lovers of blues and jazz won’t want to miss. Whether in an intimate musical setting or on a larger stage, Liz Barnes & Barbara Martin are known for engaging the audience with skillful, entertaining and emotionally-charged performances.

Liz and Barbara have each made significant names for themselves in more than 20 years of composing, touring, recording and teaching, and in 2012 they are melding their considerable talents to partner as Liz Barnes & Barbara Martin. “We love gigs where we can play off each other’s energetic stage presence and showcase our original work,” says Barbara about working with Liz. “We believe our audiences thoroughly enjoy the way we mix playfulness with skillful musicianship. And it’s great fun for us.”

The duo will be touring the East Coast throughout the year appearing in concert and at festivals.

About Liz Barnes: Jazz pianist Liz Barnes has been teaching and performing for twenty years. She quickly made a name for herself in the 80’s performing with well-known regional acts and opening for acclaimed blues artists such as Anson Funderburgh and Sam Meyers, the Fabulous Thunderbirds, Delbert McClinton, the Nighthawks and Sapphire, just to name a few. While Liz’s piano style is firmly rooted in the blues, it reflects the whole jazz tradition from bebop to modernism. She has performed extensively as a solo jazz pianist as well as with small ensembles and big bands.

About Barbara Martin: Barbara Martin is a musician known for being an accomplished vocal interpreter of the great jazz and blues standards yet brave enough to stretch the boundaries of the female jazz and blues singer stereotype. Chanteuse, girl-next-door and perceptive poet all rolled into one, the Washington Post calls Barbara Martin’s music “as American in style as it is universal in emotional intelligence.” In describing Barbara’s evolution, one reviewer states: “Her voice has become lilting and uplifting, giving off an aura of happiness, similar in register and tone to that of Ella Fitzgerald. It’s a joy to hear.” -Jim Newsom, Portfolio Magazine