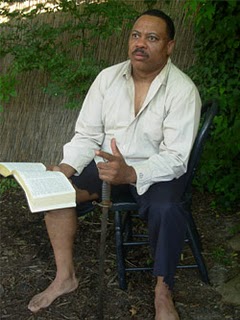 Nat’s Last Struggle is a powerful one-act, one-man show written by Norfolk playwright P. A. Wray. Nat Turner led the slave rebellion that took place in Southampton County, Virginia, during August 1831; this play is a dramatic adaptation of “The Confessions of Nat Turner,” published by Thomas R. Grey in November that same year as “an authentic account of the whole insurrection.” Woven into the piece are bits of lore and supposition regarding several aspects of Turner’s life.

Says playwright, P.A. Wray, “I became fascinated with Nat’s brilliant mind which was tormented by slavery. To find release, Nat turned to religious fanaticism – something we continue to see the oppressed do today.”

From Norfolk’s Venue on 35th, where Nat’s Last Struggle premiered:

A stunning and powerful adaptation of “The Confessions of Nat Turner,” the document entered into the Court of Southhampton County, Virginia, by Attorney Thomas R. Grey during the trial of Nat Turner. Turner led the infamous and bloody slave rebellion which began on August 21, 1831. The action begins with Nat’s sentencing and execution. The confessions are played out by Nat in the afterlife as he faces his maker’s judgment. Will Nat’s final struggle end in redemption or damnation? 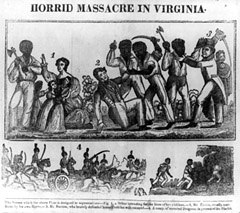 As a prelude to our special two day presentation of “Nat’s Last Struggle,” we offer the following concise history of the Nat Turner’s Rebellion. We hope your Hamner Theater experience will be enriched by an greater understanding of the events referenced in the play.

Nat Turner and a small band of other enslaved men met on Sunday, August 21, 1831, and made plans to end their bondage. Moving across the Southampton County, Virginia, countryside, they eventually murdered more than fifty white men, women and children. Their revolt lasted about twelve hours, ending when all except Nat Turner were captured by a combined force of state militia and armed civilians. Nat eluded searchers for more than two months. A $500 reward was offered for his capture, finally achieved by a farmer who found Turner hiding in a makeshift cave.

While Nat Turner was in jail awaiting trial, Thomas R. Gray, a local lawyer in the county seat then named Jerusalem, interviewed him. Sworn at the time by witnesses as truthful, his “Confessions of Nat Turner” became the primary firsthand account of this historic event. Gray describes Nat Turner as intelligent and charismatic: “He certainly never had the advantages of education, but he can read and write, (it was taught to him by his parents), and for natural intelligence and quickness of apprehension, is surpassed by few men I have seen.” Gray tells us that Turner was motivated by his belief that he was called on by God to free his people.

Nat Turner was tried, convicted, hanged, beheaded and his body was flayed and dismembered. Heads of those convicted may have been displayed on pikes as a warning to the enslaved population. Many innocent enslaved and free people of color were killed or injured by vigilantes seeking conspirators. After the rebellion, laws were enacted to limit educating slaves and restricting their ability to gather.

In 2003, Nat Turner’s skull turned up in Gary, Indiana. Debate followed as to whether it was a cultural artifact or the remains of a man to be buried.

Today it’s impossible to view the “peculiar institution” of slavery as anything but a massive crime. Most would agree that a rebellion was legitimate against that inhuman system. However Turner and his followers’ indiscriminate murder of men, women and children is hard to square with our sensibility and idea of justice.

Thomas Gray’s “Confessions of Nat Turner” is the basis for Virginia Playwright P. A. Wray’s “Nat’s Last Struggle.” The play begins with Nat’s sentencing and execution; his confessions are played out in the afterlife as he faces God’s judgment.