Go to Virginia Playwrights & Screenwriters Initiative for the most recent news.

We are expanding our script development process to include screenwriters, so the VPI will now be called the VPSI – Virginia Playwrights and Screenwriters Initiative.

All VPSI readings are open to the public and free of charge and are followed by a discussion between audience and author, which is the payoff for the playwright or screenwriter.

Come listen to a brand new play or screenplay and share your reactions with the author.

The Virginia Playwrights Initiative (VPI) is a part of the Hamner Theater’s continuing mission to foster new works for the stage, specifically those by Virginia playwrights.

VPI provides a venue for the playwright to workshop, rewrite and rehearse a new script with a company of experienced actors, a director and a dramaturg. The playwright participates in a process of readings, rehearsal and discussions with cast, director and dramaturg, culminating in a public staged reading. Following the reading, there will be a discussion open to all. This discussion is an important part of the process, providing an opportunity for the playwright to understand the impact the play has had on the audience.

We are looking for promising but unfinished scripts by playwrights who are eager to revise and finish their scripts with the helpful input of directors and actors.

Questions to info (at) thehamnertheater.com or
Virginia Playwrights & Screenwriters Initiative, The Hamner Theater, P.O. Box 106, Nellysford, Virginia 22958.
Or, use our contact form.

VPI is made possible in part by grants from the Virginia Commission for the Arts and the BAMA Fund.

Also coming up in VPSI:

Brad Larson will read his play Memory of Whiteness on Friday, April 23 at 7 p.m.

Jean Klein will read her play A Woman of Consequence on Friday, May 14 at 7 p.m.

Jonas Collins will read his screenplay Gloryway on Friday, May 21 at 7 p.m.

The Gift of Love – musical adaptation of a teleplay by Earl Hamner, by Peter Coy and Tanya Kaye

All VPI Readings are Free!

All is Always Now, by Robert Wray

The Grove at Illium, by Jane Ann Crum 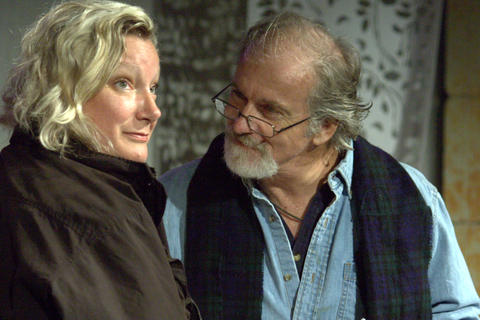 Rose Harper, Kevin O’Donnell
in The Grove at Illium, by Jane Ann Crum

Revelations by Ryan Wender
The Tragedy of John Wilkes Booth by Chris Gavaler
Therapy, The Musical by Phyllis Koch-Sheras
Red,White,Blue & Black, by Peter Gunter
The Viennese Patient, by Mark Edmundson
The Wild Duck by Henrik Ibsen, adaptation by Doug Grissom
Gabriel by Peter Coy
Blackout, by William A. Rough
All is Always Now, by Robert Wray
Slow Instructions, by Roy Robbins
Nobody’s Wife, by Cindy Dlugolecki
The Grove at Illium, by Jane Ann Crum