Written by Clinton A. Johnston 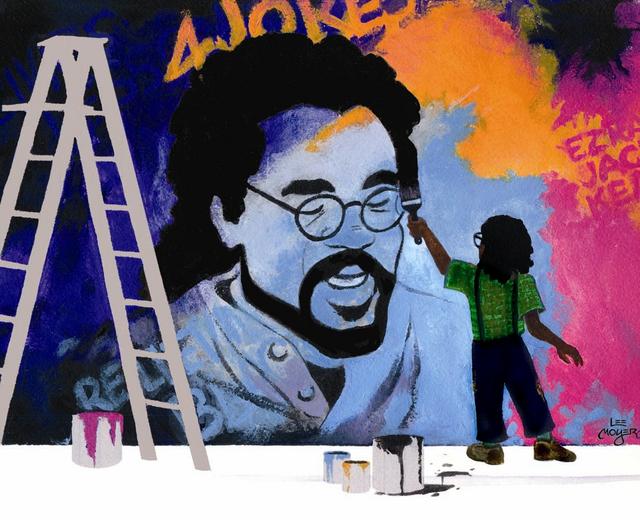 “Can you feel it? Can you see it? When do you wanna be it and when break free of it? And after all, what is it? Where does it start … and where does it end?”

No matter who you are or where you’re from, for one night at the Hamner Theater, you get to be African-American. Playwright Clinton A. Johnston takes you on a touching & insightful tour of the state of Blackness in America. This bitingly intelligent play is sometimes funny, always thought provoking. Don’t miss it.

Opening Night performance at The Hamner Theater on Wednesday, March 19, 2008 will be followed by a Champagne Reception with members of the cast & crew – Open to all.

Talkback with Playwright Clinton A. Johnston following Saturday performance.
“I wanted to create an atmosphere where we could talk about serious issues, where we could examine serious issues and really look at things and pick stuff apart and say, ‘Let’s look at this issue of blackness and ask where does it begin and where does it end, and who’s deciding that, and what happens when those decisions are made, and when is it something that propels you forward, and when is it something that holds you back?’ But do it in an atmosphere where people are comfortable, where people aren’t threatened so that they’re open to it.” –Are we brave enough yet?, by Chris Graham, Augusta Free Press,

The Hamner Theater gratefully acknowleges the generosity of the C & O Restaurant in sponsoring this production.

Am I Black Enough, Yet?, a new play by Charlottesville playwright Clinton A. Johnston, will open at the Hamner Theater on Weds., March 19.

In the play, Johnston explores the state of blackness in America. Through the theatrical device of making everyone in the audience “honorary black folk”, it opens the door for frank discussion of prejudice, assumption and discrimination. The play aims not only to examine differences, but also to encourage communication and a sense of community.

Johnston originally wrote Am I Black Enough, Yet? as a series of sketches for Charlottesville’s No Shame Theater, with the encouragement of Todd Ristau (now of Hollins University) as well as Doug Grissom, head of playwriting at UVA. The play was further developed at the Earl Hamner Playwrights Conference and DC’s Charter Theatre. The Hamner Theater & Charter Theatre have joined forces to bring this production of Am I Black Enough, Yet? to Roanoke and Washington, DC, as well as Charlottesville & Nellysford.

Playwright Clinton A. Johnston, a member of the theater faculty at Mary Baldwin College, holds an MFA in Directing from UVA, and has more than a decade of experience acting and directing in local theaters. He directed In the Blood, playing at Live Arts from March 13 – 29, and is currently rehearsing Guys and Dolls for PlayOn! His one-act play Representin’, in which he also starred, was part of the Hamner Theater production 6×6 – A Festival of One Acts.

The cast of Am I Black Enough, Yet? includes UVA graduate and Live Arts alum Edward Daniels, as well as Paige Hernandez, Patrick M. Doneghy, Sonia Justl, and Matthew Eisenberg, and is directed by George Grant, Senior Faculty member of the National Conservatory of Dramatic Arts and a teaching artist for the Shakespeare Theatre Co.

Am I Black Enough, Yet? promises to be a thoroughly thought-provoking evening of theater. It will play for four shows only at the Hamner Theater from Weds., March 19 through Sat., March 22 at 7:30pm. A champagne reception follows opening night at the Hamner. A talkback with playwright Clinton A. Johnston follows the Saturday, Mar 22 performance. Tickets for all Hamner shows are $10, at the door or by reservation at434-361-1999. For information & directions visit thehamnertheater.com.

Hamner Theater will feature “Am I Black Enough Yet?”, Daily Progress, 3/14/08

‘Am I Black Enough?’ to begin Va. tour, by Kevin Kittredge, Roanoke Times 3/09/08 (“receives a standing ovation at Dumas Festival”)

Press reaction to Am I Black Enough, Yet?:

“The strength of this piece is in its language, its humor, its humanity and its generous spirit – not in elaborate sets or visual effects. It is an enjoyably engaging evening without rancor but not without a strong viewpoint.”

Everything Turned Black: Charter Theatre’s Bold Comic Play
in The Express, from The Washington Post, 4/24/08

Washington Post review, ‘Black Enough’: Tales that get under the skin, by Celia Wren 4/17/08. “…a patchwork of poignant and satirical skits grappling with questions of ethnicity…Johnston’s bold tonal shifts add surprise and texture to the piece, which is always thoughtful…” 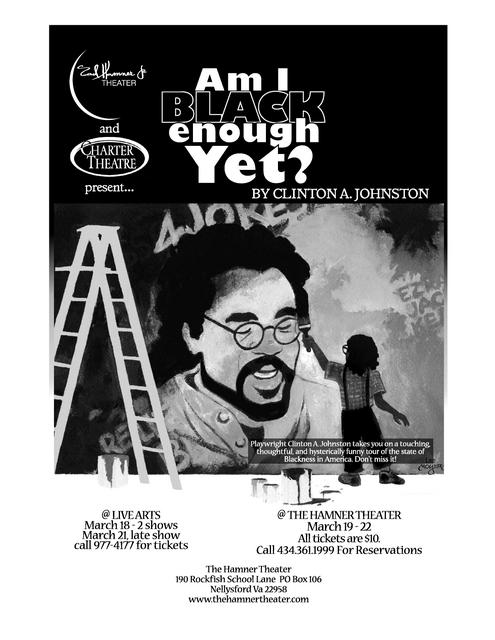 January 9 – February 8, 2009
Back by Popular Demand at Theatre on the Run in Arlington
Am I Black Enough Yet?, by Clinton Johnston