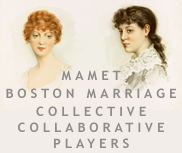 This Collective Collaborative Players production is heading to the Piccolo Spoleto Festival in Charleston. Join us at the Hamner Theater in Nellysford to see this play just before it travels to Spoleto at the end of May.

About the Show
The Virginia-based Collective Collaborative returns to Charleston (A Shaker’s Path, 2010) with its hilarious, irreverent, and bantering production of David Mamet’s Boston Marriage. When the impending arrival of a young lover threatens their cohabitation, two cantankerous women of high society find their lives thrust into chaos. Barbing, bartering, and badgering make way for sleuthing, sooth-saying, and snake-tongued gibes at the Scottish maid with a secret of her own. College of Charleston alum Laura Rikard (Best Actress, Virginia Film Festival 2011) stars as Claire alongside Richmond Theatre Critics Best Actress Laine Satterfield as Anna. Louise Mittelman rounds out this all-female cast as Catherine, the maid. Don’t miss the play the New York Times hailed as, “Devastatingly funny and exceptionally clever… [it] demonstrates anew Mamet’s technical virtuosity and flexibility.”