All is Always Now, by Robert Wray
Robert Wray’s comedy about actors and acting, loss and moving on was developed, in part, at the Hamner’s VPI workshop. Elements of Shakespeare, Melville and Chekhov combine to create a story about a group of theater friends who gather together for one last night in New York. (Alert: twenty-first century bawdiness)

‘This is a funny show…a coming-of-age story for grownups… This production, with these actors and directors, is terrific.’ – Clare Aukofer, Daily Progress 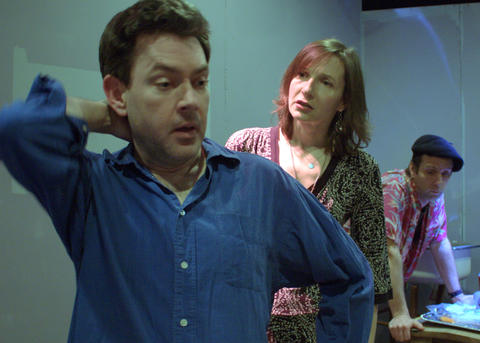 On August 7, 1974, the night before becoming the first and only American president to resign, Richard Nixon met with Secretary of State Henry Kissinger at the White House. There are no tapes of this meeting. In Russell Lees’ political satire, Nixon has not yet decided to resign, and both men are determined to secure their place in history. They drink, they talk…

“Nixon’s Nixon was absolutely fantastic – well written, well staged, and well acted. It is an absolute jewel that should be shared with others.” (Hamner Theater audience member)

Directed by Marcello Rollando, with Chris Patrick (at right) and Chris Baumer.

Read about Nixon’s Nixon & All Is Always Now in the press:

Theater for theater people: Local play works in big way by Clare Aukofer
‘The play is funny, it’s moving, it explores universal truths in a specific way. It works on many levels and leaves room for the actors who play the actors to bring themselves to their characters. This production, with these actors and directors, is terrific.’

Sympathy for the president by Cris Edwards, C-ville Weekly

Press info for In Repertory: Nixon’s Nixon and All Is Always Now.