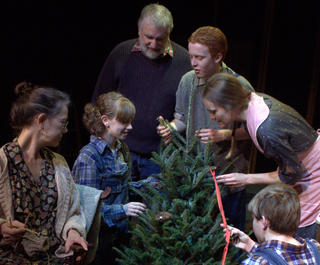 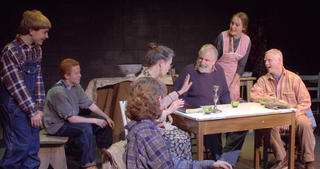 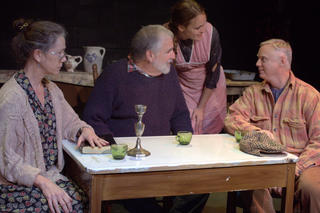 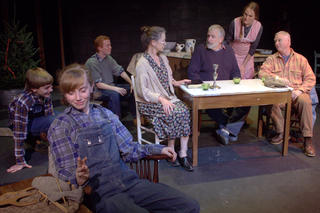 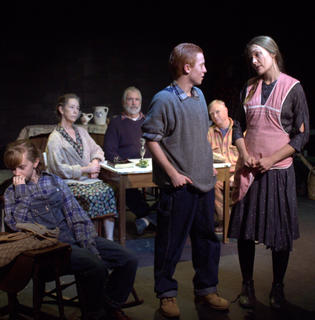 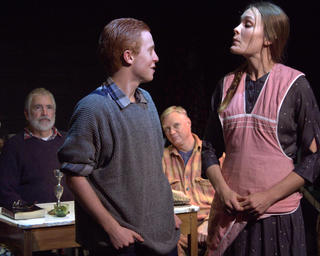 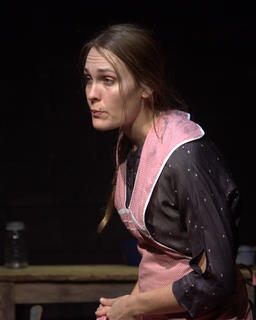 The Homecoming returns to the Hamner!

In 1971, CBS aired a TV pilot called The Homecoming: a Christmas Story. This show became The Waltons, the TV series that made Earl Hamner Jr. the most “powerful man in television” from 1972 – 1978. The Hamner Theater’s Homecoming is an original adaptation of Hamner’s novella, which playwright (and Hamner Theater co-Artistic Director) Peter Coy tailors to fit the cast as needed.

The Homecoming is about family, and director Boomie Pedersen casts families whenever possible. This year there are more than ever before: there are 21 speaking parts, many of which are doubled, resulting in a total cast of 32. Casts are grouped by hair this year – the Straight hair cast, and the Curly Hair cast.

In their Hamner debuts, Nelson County Superintendent of Schools Roger Collins shares the part of father Clay Spencer, and Barbara Page, who remembers teaching in the theater when it was a school, takes on the part of Miriam Dooly, Hawthorne Dooly’s widow. (Barbara is also the author of “Annie’s Ride to Grandma’s” which tells the story of a little girl’s journey to her grandmother’s house in Piney River.)

The casts also include Richard Averitt as Adult Clay Boy, and his children Savannah and Quinn as Pattie Cake and Mark. Savannah shares her role with her cousin Ella Manthey, and another cousin, Maddie Bridge, is John.
Alexey Zielinski is Clay Boy and his brother Sasha is the sound man.
April Winsheimer is Olivia and her daughter Kaya is Amanda, the City Lady’s daughter.
David Ferrall appears as Ep Bridges and his daughters Louise and Alice are Becky and Luke respectively.
David Stewart, who appears regularly with the Hamner Improv Troupe, HIT, shares the roles of Charlie Snead and Clay Spencer, and his son Cameron, also a HIT regular, is Matt.
David Key, who has been seen at Play On! Theatre in Charlottesville, makes his Hamner debut, sharing the roles of Ep Bridges and Charlie Snead.
Brothers Will and Henry Yagel play brothers Luke and John while Herbert Wender returns this year as Mark, having played Luke in the last production.
Robin Luecke also makes her Hamner debut as the City Lady, sharing the role with Linda Crowe; Robin’s son Jack Luecke takes on the role of Birdshot.
Dakota Crocker, last seen as Mark, is Birdshot and his sister Willow appears as Shirley.
Jacquie Burke is the other Shirley; her father Thomas Burke shares Adult Clay Boy and her mother Pam Burke is Emma Staples.
Rounding out the cast are Jo Rozycki as Becky; Mary Coy and Carol McAvoy, sharing the role of Etta Staples; Rick Steeves returns as Grandpa Homer, Cindy LaChance, also a HIT favorite, takes on Grandma Ida.

The casts will alternate performances, opening Thurs., Dec. 1 with the Curly Hair cast and Fri., Dec. 2 with the Straight Hair cast. There will be a reception after each of the openings with cider and cookies, or champagne for those over 21.

There will be two free previews, Tues., Nov. 29 for the Curly Hairs and Weds., Nov. 30 for the Straight Hairs. And there will be two pay-what-you-will performances on the second and third Thursdays, one for each cast.

About the Hamner Theater: The Hamner Theater, now presenting its seventh season, is a project of the Rockfish Valley Community Center in Nelson County, a 501c3 non-profit organization, and receives funding from the Virginia Commission for the Arts, private foundations and individual donors to support its mission of bringing professional theater to Nelson County. Please call the Box Office at 434-361-1999 to purchase tickets. Learn more at thehamnertheater.com.