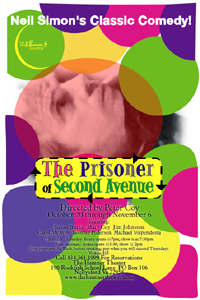 A Comedy by Neil Simon
Directed by Peter Coy

“A funny production of a funny show… Skillfully directed by Peter Coy, with Michael Volpendesta and Boomie Pedersen bouncing off of each other beautifully.” –Clare Aukofer, Daily Progress

Itʼs a comedy but something is wrong. Mel Edison canʼt sleep. His air conditioner has broken, his neighbors wonʼt shut up. His job is hanging by a thread. Mel is heading for a meltdown.

Itʼs 1971 in New York City and we find Mel and Edna Edison caught in an economic downturn. Unemployment is high. People are losing their jobs left and right. Money is scarce. But itʼs a comedy.

In the best possible sense, Mel is totally mad. Heʼll spin wild things out of his imagination that are simply dazzling. And Edna is sticking with him as he downloads all this stuff thatʼs coming to him in this daffy and upsetting way.

Heʼs wry. Heʼs bemused. He belly laughs at a lot of things. It means the difference between losing the meaning of your life and holding on to that mysterious something that is the essence of who you always were.

Itʼs a comedy that satisfies your deepest desires. 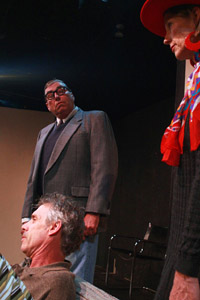 Director’s Notes: Once, when I was studying to be a clown, all 16 of the students were subjected to an exercise called “the ring of fire.” This is how it worked. We sat on the floor in a circle. Each of us, when it was our turn, had to go into the middle of the circle. We could not get out of the middle until we had made everyone in the entire group laugh at the same time. Everyone laugh at the same time. You had to be funny for everyone simultaneously. The only rule was: you couldn’t tell a joke.

The first person went, a very funny person. He dragged a chain around, doing different things with it, trying to push it, getting tied up in it. After a while he got the required laughs. The next person went. She tried very hard to be funny, pretending to trip on her feet, pretending to be embarrassed; it went on for a long time, maybe 15 minutes. It was painful for all of us. The leaders began to feed her ideas. “Did you ever have a pet that died?” was one. Finally she got some laughs and was freed more out of pity than with success.

I was next. I had been planning to tell about the time I had said something inappropriate to my very vain great aunt. She was gloriously dressed and made up. As she was leaving for her fancy party, giving me a kiss goodbye, rubbing her bristly cheek against mine, I said to her, with my proud parents standing right there next to me, “I guess you forgot to shave tonight.”

But instead of telling that story, something else happened, something else jumped out of my past and into my thought. I blurted out, “When I was nine years old I was hit by a car.” Without a moment of hesitation everyone in the group burst out laughing, including the leaders against their will. 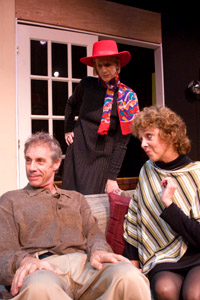 What was that about!? I have no idea. I have no idea why I said it, why I felt it might be funny, why anyone might have thought it was funny. I had spent six months in the hospital as a nine year old, had had five major surgeries over several years, and still had persistent problems. This whole laughter thing was crazy.

Later in the same ring of fire, a young woman, the youngest there, when it was her turn, went into the middle of the circle. She was visibly scared and upset. She looked around at everyone, and said, “I don’t know why we are laughing at any of this,” and immediately burst into tears. At which point everyone erupted as one into wild laughter.

I am telling you this because for me humor is a mystery, a miracle, that I can’t come close to figuring out. How it works is maybe a deep secret in the mind of an inscrutable god. And I always keep this in mind. Edgar Allan Poe, the crown prince of darkness, wrote a humor column for a Philadelphia weekly publication for three years. 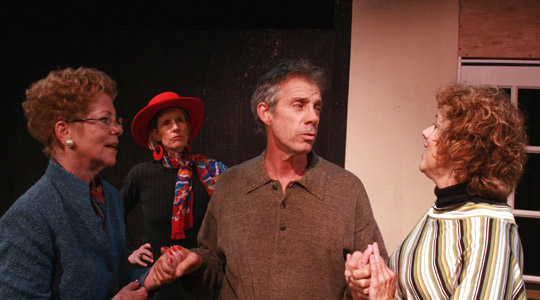