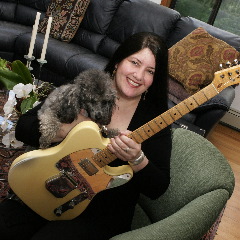 Guitarist, singer/songwriter, Tanya K, (“a certified Bonnie Raitt badass” – The Hook), will be performing new original music in a lyrical acoustic-based combo. Some of the new titles include: “Jack and the Black Bear”, “Short Time in a Hot Oven”, “My Sister’s a Lesbian”, “Phone Sex”, plus, most requested, “Get Over It”!

This November showcase will feature the vocal talents of Mr. John Owen, currently directing A Little Night Music for LiveArts . Also on board for this fun and surprise-filled performance will be guitarist Andrew Ewell, formerly with American Dumpster, drummer Gary Taylor and Mark Jackson, playing bass.