The Gift of the Magi, Then & Now, by Peter Coy

A new version of an old favorite, with a modern twist, The Gift of the Magi, Then & Now: two tales of love, generosity and understanding. It’s a poignant reminder of the spirit of Christmas giving – for all ages.

Wednesday, Dec. 15 show is Pay What You Will.

For The Gift of the Magi, Then & Now, Peter Coy has written two one-act plays, both inspired by O. Henry’s classic story of generosity & selfless love.

In the first play (The Gift of the Magi),newlyweds Della & Jim, (Lianna McAvoy & Eamon Hyland) show their love for each other by giving up their dearest possessions. Christina Courtenay is Mary, the worldly-wise neighbor. Directed by Carol Pedersen.

The second play (…the twenty-fourth of December…) is the story of a present-day, not-so-traditional family, April (Jane Hearne), her son Bobo (Alexey Zielinski) and step-daughter Jules (Gabriela Friedlander), the daughter of April’s second husband Greg (Richard Averitt). While April yearns for Greg, who has been deployed to Turkey, the two teen-agers do their best to make Christmas special for each other. Kevin O’Donnell appears as April’s helpful best friend, Declan. Directed by Boomie Pedersen.

“To me, it is about giving & expecting nothing in return, it’s the act of giving from the heart that is important – they’re love stories.” – Peter Coy (2010) 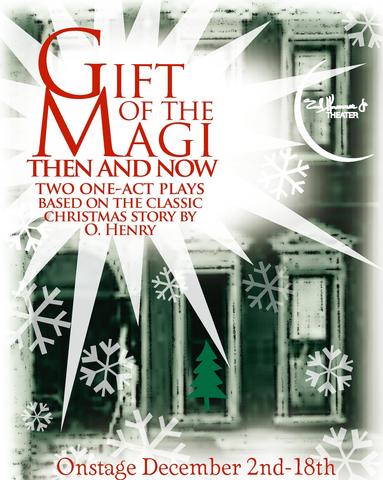 “The magi, as you know, were wise men–wonderfully wise men–who brought gifts to the Babe in the manger. They invented the art of giving Christmas presents. Being wise, their gifts were no doubt wise ones, possibly bearing the privilege of exchange in case of duplication.

And here I have lamely related to you the uneventful chronicle of two foolish children who most unwisely sacrificed for each other the greatest treasures of their house. But in a last word to the wise of these days, let it be said that of all who give gifts, these two were the wisest. O all who give and receive gifts, such as they are wisest. Everywhere they are wisest. They are the magi.” – O. Henry (1906)

About O.Henry:
William Sydney Porter, or O. Henry, wrote mostly about ordinary people going about the daily adventure of living. Not infrequently, his stories involve coincidences or unexpected twists that result in surprise endings like that in “The Gift of the Magi.” Before becoming a full-time writer, he worked in a drugstore, on ranch, in a bank, and on newspaper staff. When he was in his early twenties, he published a weekly humor magazine, The Rolling Stone, which failed. He then took a job with the Houston Post newspaper. However, a past misdeed, embezzlement of bank funds, caught up with him. To escape punishment, he fled to Honduras. When his wife, Athol Estes Porter, became terminally ill, he returned to the U.S. to be with her. After her death, he spent more than three years in prison in Columbus, Ohio. There, he cultivated his writing skills. After his release from prison, he became a professional writer, settled in New York City, and became famous under his pseudonym, O. Henry.
(from http://www.cummingsstudyguides.net/Guides4/OHenry.html)